Project Oilsand, also known as Project Oilsands, and originally known as Project Cauldron, was a 1958 proposal to exploit the Athabasca Oil Sands in Alberta via the underground detonation of up to 100 nuclear explosives;[1] hypothetically, the heat and pressure created by an underground detonation would boil the bitumen deposits, reducing their viscosity to the point that standard oilfield techniques could be used.

In the 1950s, a startling solution to the as-yet unsolved challenge of developing Alberta’s deeply buried oil sands began to circulate. The proposal, known as “Project Cauldron,” was initiated by Los Angeles-based Richfield Oil Corporation, whose officials described it as an “experiment in the peaceful use of nuclear energy as an aid in producing oil from the McMurray oil sands buried too deeply to permit economic extraction of oil by mining methods.” The project was conceived of as part of Operation Plowshare, a larger United States-based movement to harness the power of nuclear explosions for peaceful application.

The scheme was the inspiration of Richfield Oil’s Manley L. Natland, who believed that an underground blast was the most efficient way to generate the tremendous heat needed to liquify the thick, tarry oil so that it could be pumped to the surface by conventional wells. The test site was planned for a location on Pony Creek about 97 km (60 mi.) south of Fort McMurray. There, a 9 kt (18,000,000 lbs.) nuclear device would be detonated at 381 m (1,250 ft.), about 6 m (20 ft.) beneath the oil sands themselves. Natland anticipated a 70 m (230 ft.) cavity would result and fill with several million cubic feet of melted oil. Because the bomb would be cheaper than drilling a deep well, the search for an economically feasible method of extracting the oil seemed to be at an end.

In 1959, Robert Fitzsimmons wrote a letter to the editor of the Edmonton Journal in response to an article about the project that appeared in the paper.

After receiving initial approval from the U.S. Congress Atomic Energy Commission, Richfield also gained preliminary approval from the Mines Branch, Atomic Energy of Canada and the Defence Research Board in Ottawa; provincial support followed. The director of the Mines Branch of the Department of Mines and Technical Surveys predicted that a successful blast would “double the world’s petroleum reserves.” Delegates were identified, and committees formed. Tests were undertaken, and data gathered. Reports were written, and assurances about radiation, groundwater contamination and seismic effects were given. Even the project’s name was changed to “Project Oilsand” in an effort to allay public fears. Nonetheless, the proposal was quashed.

Public pressure for an international ban on nuclear testing had been mounting. Both Canada’s prime minister, John Diefenbaker, and his newly appointed federal secretary of state for external affairs, Howard Green, were aligned with this effort. The death knell for Project Oilsand was given in April 1962 when Green announced in a speech to Parliament, “Canada is opposed to nuclear tests. Period.” With that, Project Oilsand was abandoned. Nevertheless, Natland presented the proposal at the Second Athabasca Oil Sands Conference in 1963, and his paper was included in the accompanying publication, Athabasca Oil Sands—The Karl Clark Volume. He was even granted a US patent on the proposed process in 1970. In 1976, the idea was resurrected by Phoenix Canada Oil as “Project Athabaska.” That, too, went nowhere. Operation Plowshare was eventually cancelled in 1977 due to public opposition and lack of Congressional support.
http://history.alberta.ca/energyheritage/sands/mega-projects/setting-the-stage/the-second-athabasca-oil-sands-conference/project-oil-sand.aspx 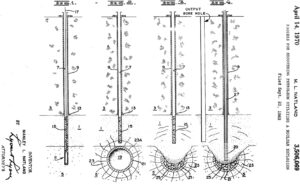