Popular events at Theater Two included big dances that featured Los Alamos band “The Keynotes.” This band, created by Harold Fishbine, who had been an amateur musician before the war, played Big Band classics. The band continued to play after the war, doing gigs in Santa Fe. Two other bands at Los Alamos were called Los Cuatros and Sad Sack Six.

Popular events at Theater Two included big dances that featured Los Alamos band “The Keynotes.” This band, created by Harold Fishbine, who had been an amateur musician before the war, played Big Band classics. The band continued to play after the war, doing gigs in Santa Fe. Two other bands at Los Alamos were called Los Cuatros and Sad Sack Six.

“Dancing was also a favorite. Square dancing. The military base commander was particularly interested in square dancing, so he naturally was all for it and was generally the head man there at the square dance,” recalled Berlyn Brixner, a photographer and camera engineer. “They had plenty of people who were good at music playing, so they had plenty of music.”

In addition to the dances, Los Alamos also had its own orchestra and even put on plays. “My wife had been interested in plays before coming to Los Alamos, so a group of people soon got together and were presenting plays and my wife was among the actresses,” said Brixner. “They used to bring me in for set construction and that sort of thing. I was kind of a carpenter and painter and what have you to try to get sets made, and we had everything we needed to do those. They made very nice plays. They were enjoyed by everybody.” 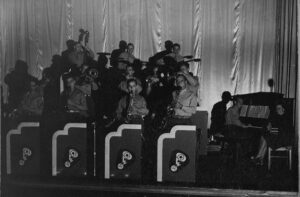 Soldier Harold Fishbine was with the rest of his unit in California in the early 1940s, expecting to be sent to the Pacific. Then, out of the blue, he received orders to report to Santa Fe. He had no idea what it meant.

When he arrived at 109 East Palace in Santa Fe and was greeted by a nice middle-aged lady, Fishbine was sure he was in the wrong place. A few hours later, he was on his way to Los Alamos, the town he would call home to this day. Fishbine recently spoke with the  Los Alamos Daily Post about his experiences.

When he reported to the officer in charge, Fishbine was told “we don’t do the saluting up here.” Fishbine knew he was in an unusual army installation, but didn’t find out what he’d be doing there until a few days later.

Trained in signal corps radio school, he expected his job to have something to do with that, but ended up rebuilding x-ray surge generators at first, then moving on to work on other projects. An accident in the machine shop left him with some time on his hands while he recovered, and Fishbine wandered down to Theater No. 2, where the sound of jazz attracted him inside.

Born in New York City in 1919 and raised in Far Rockaway, Fishbine had been an amateur musician in New York before becoming a soldier, trading in his classical violin for a string bass in order to play with the dance orchestras that were forming in the City.

Big Band Jazz was having its heyday and Fishbine was part of it. He’d sometimes head to the nearby Black neighborhood where he played with great musicians like sax player Jimmy Green. Some of them would go on to play venues like the Apollo Theater, Fishbine remembered.

“One of my friends had a big sedan. I’d stick my bass on the fender, roll down the car window and reach out to hold it in place. Then we’d have room for everyone,” Fishbine said.

Having played with some really good musicians, Fishbine had higher standards than some. The music coming from Theater No. 2 in Los Alamos wasn’t up to those standards. “It sounds like they could be good if they rehearsed,” Fishbine told Cpl. Tom Fike outside Theater No. 2. Fishbine ended up rehearsing the band for two hours.  “How would you like to form an orchestra?” Fike asked. “And that’s how I formed the first big dance band,” Fishbine remembered.

He advertised for musicians and came up with 12 or 13 good candidates. In three months Los Alamos had its own big band.
“We played once a week for dances at the rec hall and we really got a crowd,” Fishbine said. “It was a time the boys and girls could get together legally.”

One would-be musician told Fishbine that rejecting him was a big favor, because while Fishbine was on the bandstand, he was down on the dance floor with the girls! The price of admission was 45 cents and the band, christened the Keynotes, played Big Band classics by Glenn Miller, Tommy Dorsey and Bennie Goodman.

In addition to the big band, Fishbine and his friends spun off a six-piece combo, The Sad Sack Six, to play in Los Alamos GI clubs.

Nobody ever did tell Fishbine what they were working on in Los Alamos, but he said he “just knew.” Then the time came to test “the gadget” and he knew for sure.

The war ended and word was out that there was a great band up on the Hill. They played for fancy parties in Santa Fe and for returning GIs in Gallup on New Year’s Eve. That event was the biggest dance the big band ever played, Fishbine said. Fishbine led The Keynotes for nearly two years.

After many months of secrecy, Fishbine was finally able to ask his fiancée Bonnie to come to New Mexico for their wedding, to take place a week before he was discharged. It nearly didn’t come off when, depending on a friend for a ride down the hill, he was late getting down to Santa Fe and Bonnie and her mother thought he wasn’t coming and were thinking of going back to California!

Once married, the couple had to live in one room with two single beds, their first home in Los Alamos.

In 1946, they left Los Alamos for Florida, then California. Arnie Roensch, the trumpet player from the original band, took over as leader of the Keynotes.

Bonnie and Harold returned to Los Alamos in 1947 when Harold took a job at the Lab and he went back to playing with The Keynotes and The Sad Sack Six.

“I had a lot of good friends here and it was a nice environment,” Fishbine said. “It’s one of the nicest places we’ve ever been.”

The city boy from New York had found a permanent home in New Mexico.

While finishing his schooling at UNM and finding a career in electronics at Los Alamos National Laboratory, as well as raising two boys, Glenn and Brian, Fishbine continued to play music. He got to play with some great musicians like pianist Freddie Valdez and with the UNM Symphony. He also played with Los Alamos musicians.

Big Band music was to continue in Los Alamos under different band leaders and with different musicians. The Big Band tradition continues in Los Alamos today with the Los Alamos Big Band under the direction of Jan MacDonald. That tradition can trace its roots back to the days of the Manhattan Project and the war-time big band formed by Harold Fishbine.

Now in his 90s, Harold Fishbine has had to lay down his bass, but he continues to love Los Alamos—and music.