About 800 yards south of ground zero at Trinity Site, construction engineers built a heavy-duty 20-foot wooden platform. It had to be sturdy because they then stacked 108 tons of TNT on top of it. Then, on May 7, 1945, well before dawn, the neatly stacked boxes of TNT were detonated.

About 800 yards south of ground zero at Trinity Site, construction engineers built a heavy-duty 20-foot wooden platform. It had to be sturdy because they then stacked 108 tons of TNT on top of it. Then, on May 7, 1945, well before dawn, the neatly stacked boxes of TNT were detonated.

This little-known event was the dress rehearsal for the test of the first atomic bomb at Trinity Site — when the world was ushered into the atomic age on July 16, 1945. It also provided the terminology we have used for the past 70 years in trying to grasp how much energy is released in a nuclear explosion.

This 100-ton event was Dr. Ken Bainbridge’s idea. He was the test director at Trinity Site and he thought it made sense to do a dry run to make sure they had it right before trying the real deal. Oppenheimer apparently disagreed but eventually relented.

First of all, scientists planned to explode the atomic bomb at Trinity Site atop a 100-foot tower to simulate the aerial burst that was planned for its combat use over Japan. Also, elevating the detonation point, gave them an excellent view of the explosion during the first few fractions of a second. Scaling that down for the 100-ton explosion, the platform was built 20 feet off the ground.

During the 100-ton shot, the project ran the critical timing and data collection systems. These systems turned on measuring and photography equipment at the correct times and triggered the explosion itself. Since the Fatman test would be a one-and-done test, it wouldn’t do to have cameras and radiation detectors come on a second too late or so early the film ran out before the explosion even began.

To simulate a radioactive crater after the explosion, scientists made a slurry of radioactive material from the reactor in Hanford, Washington and ran it into plastic tubes buried in the stack of boxes. Afterward, the scientists measured the dispersion of this material in and around the small crater. The crater was five feet deep and 30 feet across.

After the test, they drove one of the lead-lined tanks into the crater. They were rehearsing the collection of soil samples after the main event when radiation levels would be intense at ground zero.

Finally, the event was a way to calibrate many of the instruments measuring blast effects by using an exact quantity of explosives. It is no coincidence that since the Trinity test 70 years ago that the yield of nuclear weapons has been communicated in tons of TNT.

One problem with communicating that yield in tons of TNT is that most people have nothing in their everyday lives to compare it to. Just a few tons of anything is hard to visualize. Changing the units to pounds puts it in the realm of everyday experience — everyone knows what five pounds feels like – but the numbers then get too large to grasp. For instance, using pounds, the TNT shipped to Trinity weighed 200,000 pounds. How many train cars did that take?

We don’t know how many train cars it took, but we know the TNT came in wooden boxes from the Volunteer Army Ammunition Plant at Chattanooga, Tennessee. The plant was built at the beginning of World War II to make trinitrotoluene or TNT as it is more commonly called. The plant also operated during the Korean and Vietnam Wars. It is now closed down and has been transformed into an industrial park and nature park. 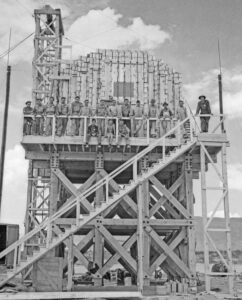