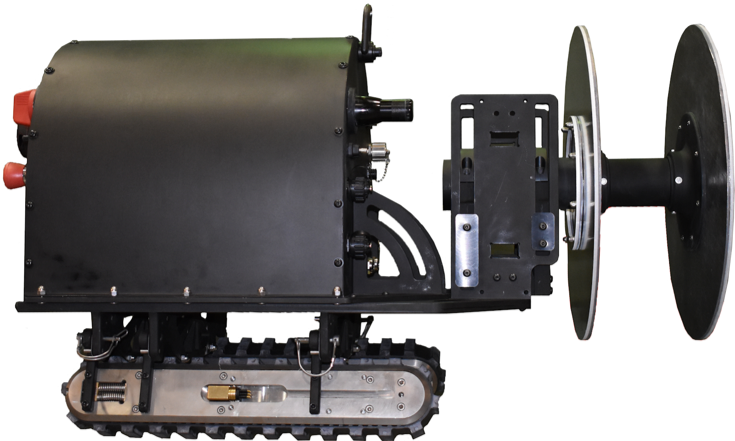 Cylindrical in shape, about 3 feet long and undeterred by radioactive waste, RadPiper is a robot developed by a team of scientists at Carnegie Mellon University’s Robotics Institute to detect traces of nuclear material at a U.S. Department of Energy facility in Piketon, Ohio.

It’s part of the CMU Pipe Crawling Activity Measurement System, and the team hopes it will revolutionize efficiency and safety in the DOE’s nuclear cleanup program, which anticipates at least 50 years of work ahead.

The Piketon plant was decommissioned in 2000, after 46 years of enriching weapons-grade uranium for Cold War-era government projects.

“At the time that it was operating, it was using as much electricity as Manhattan just to operate the uranium enrichment plant,” said Heather Jones, the senior project scientist who leads the RadPiper team’s two dozen mechanical and software engineers.

Now the federal government wants to demolish the building and make way for a new industrial park. But before that can happen, every square inch of the facility must be inspected for radioactive material and decontaminated.

Otherwise the demolition would present a significant safety hazard, Jones said, exposing workers to unacceptable amounts of radiation or even an explosion.

“If there’s too much uranium-235 in one location, there is a concern that at some point that could go critical. Something could explode,” Jones explained. “But for regulatory reasons, it’s required that they measure every foot of pipe.”

More than 75 miles of uranium enrichment pipes span three large buildings, or the size of 158 football fields, according to a CMU release.

Before CMU scientists devised RadPiper, the inspection and decontamination process of deconstructing a former enrichment plant was all done by hand. Human crews used motorized scissor lifts to reach pipes 12 to 15 feet in the air and took radiation measurements every few feet.

RadPiper would change all that. The Department of Energy paid CMU $1.4 million to develop a pair of the wireless robots. Together, the two would tackle at least 15 miles of remaining unchecked pipe in the facility. Unlike the human process, RadPiper would need no breaks.

RadPiper rolls through the pipe on treaded tracks at a rate of 10 feet per minute. It features a disc-collimated sensing instrument, which “uses a standard sodium iodide sensor to count gamma rays,” according to CMU. That technology isn’t new, said Jones, but its application is.