Mikhail Larionov’s Rayonism was no exception. Similarly to many European avant-garde artists, his theory drew upon a broad spectrum of contemporary scientific and parascientific approaches alike.

In a 1936 letter to Alfred H. Barr Jr, the director of the Museum of Modern Art in New York, Larionov, in a slight annoyance, pointed out: “I am usually quite indifferent to what people think about various issues and me personally. I am not that interested in keeping track of when I started speaking about Rayonism. No one yet talks about it anyway. Even if someone does, I am sure you are aware it is not exactly Rayonism that they are talking about, since abstract painting is by no means Rayonism yet. This is the reason why I am writing to you, as I believe
that the issues of the materialisation of the spirit might be of interest to you”.

In the letter to Alfred H. Barr Jr mentioned earlier, Larionov emphasises the link between Rayonism and various kinds of radiation. “Rayonism is not concerned with the issues of space or motion at all. It understands the Light and any rays, be it radio, infrared, ultraviolet, etc., as a physical basis as such”. He continues, “Rays of any kinds are the subject of Rayonist research, including radioactivity and the radiation of human thought”.

Rayonist painting draws inspiration not only from invisible reminiscences of aether forms. It emerges at the intersection of external rays and the rays that come from the thoughts of the artist. When the radiant matter of thought and the invisible radiant forms of aether intersect, a Rayonist picture is born. Larionov observed, “If light, radio, and other rays are material and if our thoughts are a form of radiation too, then we just need to find the crossing point between them and then what I am talking about will occur”.

Following Le Bon’s reflection on the new properties of the radiant matter, one of the critics
wondered: “What if the process of radioactivity is identical for all kinds of bodies? Doesn’t every substance exist in a continuous state of decay?” Bybthen answering directly, “the answer to the ques tion mentioned above is definitely affirmative”. Dissociation of the matter that manifests itself in radioactive emissions, and which is a feature to all physical bodies to varying degrees, was considered an evident proof of the finiteness of matter. Apocalyptic imagery constructed by human thought and provided with a scientific framework heralding the inevitable dissolution and vanishing of the matter, fitted the context of tension and anxiety.In this regard, the Rayonist painting that recreates the invisible rays “in the space between the objects”, i.e. fulfilling the process of the dissociation of matter, represents the very process of matter’s dissolution. This disintegrative power of Rayonism was immediately perceived by the contemporary critique. Iakov Tugendkhol’d reviewed Larionov’s Rayonist works he saw at the “Target” exhibition in 1913 in the following terms:

We are no longer witnessing a myth-making [mifotvorchestvo], but physics instead […]. French Pointillists decomposed the colours of nature into the primary colours; Moscow path finders need more than that, they want to reduce all the nature to the ‘crisscrossing of rays’, the ‘colour dust’. Neo-Impressionism is a dematerialisation of the universe, but yet it bears little comparison with the radical and ultimate disintegration of the world, to which Larionov aspires.

Indeed, the miraculous texture of Rayonist painterly surface reproduces matter’s dissolution, its
death and ultimate disappearance. It is literally in non-objective painting that we see only the effects of the dissociation power, the radiant matter. The materialistic “apocalypse” that unfolds in the scenes of dissolution and disappearance, alongside those of transformation and regeneration of matter which is recognisable in Larionov’s Rayonist works, can hardly be considered a theoretical construct intentionally elaborated by the artist. Apocalyptic tone is more likely a side feature of his paintings that appears to esonate when analysed within the scientific context that surrounded Larionov’s theories and works. 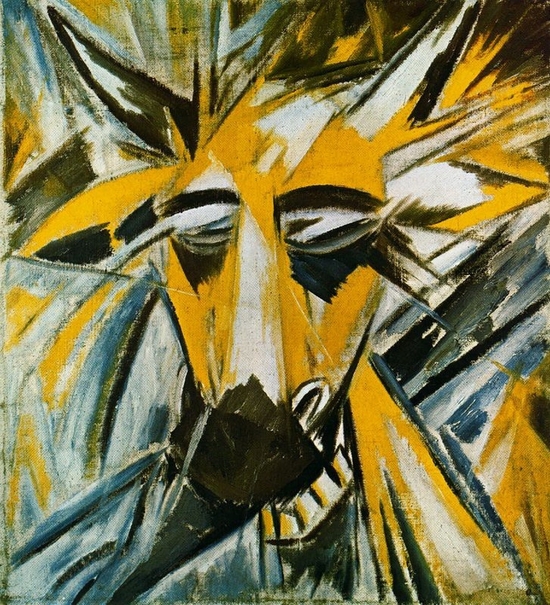 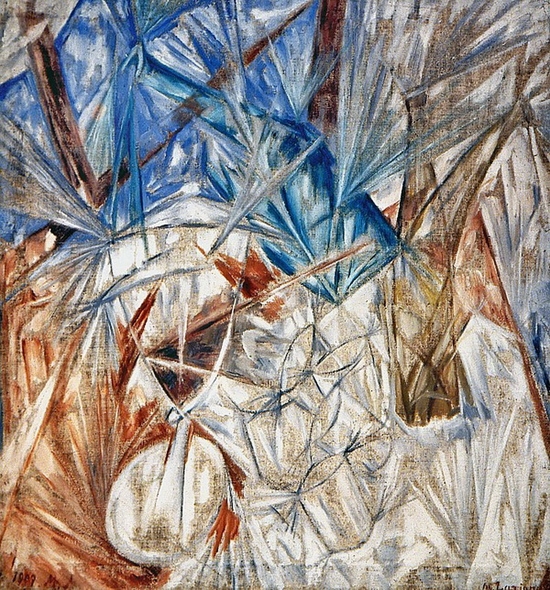